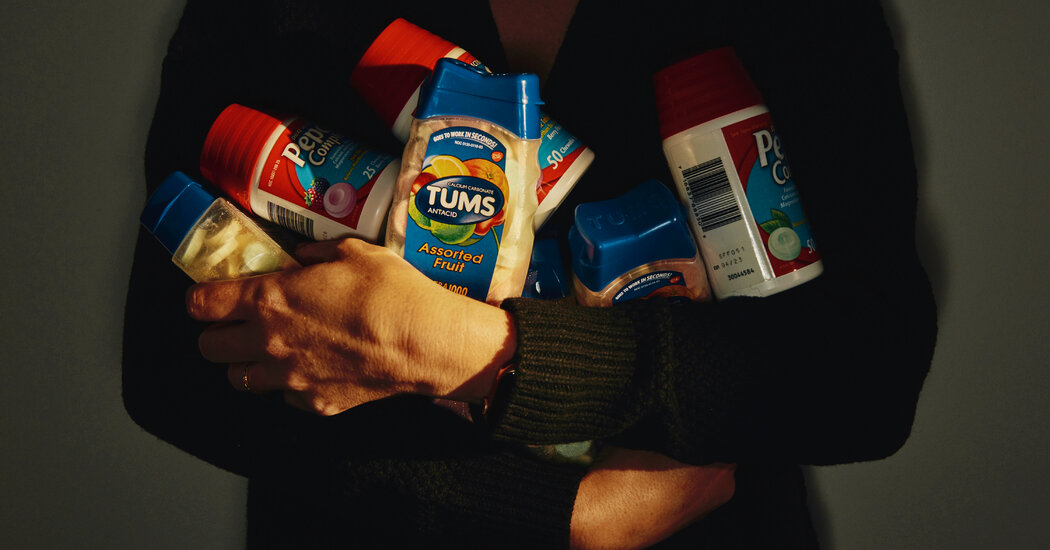 For a Nation on Edge, Antacids Become Hard to Find

First it was toilet paper. Then it was meat.

People searching online or in stores for over-the-counter tummy soothers are finding that they can’t easily buy antacid medications like Tums, Pepcid and its generic version, famotidine, in parts of the country. A few weeks ago, Wegmans Food Markets took the step of limiting shoppers to two packets of famotidine products per trip.

During a pandemic that has seen bursts of hoarding, this may be the most unexpected.

Americans are stressed. They’re concerned about the rising number of coronavirus cases. They worry about their jobs. Remote learning is a nightmare and grocery shopping is no walk in the park. Not to mention the elections. And now, here come the holidays. The result is that some people are dealing with “Pandemic Stomach,” acid-churning episodes that are resulting in the increased demand for over-the-counter and prescription antacids.

And antacids have also been popular with those who have yet to have any indigestion or heartburn. People began stocking up on them after preliminary studies suggested famotidine could reduce the symptoms of coronavirus. Another buying wave hit this fall when President Trump was treated for coronavirus and White House officials said that he was on famotidine, along with zinc and vitamin D.

For those in need of relief, the shortages are maddening.

When Maia Callahan, 24, a recent early education graduate who is teaching families and tutoring remotely in Greenfield, Mass., tried to drop her usual order of Pepcid into her online Stop & Shop cart in early September, it kept saying the product was out of stock.

“I thought, OK, I’ll put an order in through Amazon,” said Ms. Callahan, who has an autoimmune disorder and has taken medication to treat her heartburn since she was 17. “That was the worst. One of the heartburn medications was three times the price it usually was. I wound up taking Tums for two weeks.”

Physicians said that when quarantines were lifted this spring, they started to notice more patients reporting symptoms of heartburn and acid reflux.

“I think part of it is the stress of everything going on in the world,” said Lauren Bleich, a gastroenterologist in Acton, Mass., about 25 miles northwest of Boston, who said she has seen a 25 percent increase in patients reporting heartburn and similar symptoms.

But she also said the coronavirus, which has uprooted people’s normal lives and forced many to work from home, has led to many “dietary indiscretions,” which are triggering these symptoms.

“We’re more lax than we used to be with alcohol or sweets or our comfort food,” Dr. Bleich said. “And then there’s the lack of activity or exercise. Weight gain definitely contributes to heartburn and acid reflux.”

Another culprit appeared in early November.

“We had a lot of people with upset stomachs, heartburn and indigestion around the election,” she said.

Dr. Atul Maini, the medical director for The Heartburn Center at St. Joseph’s Health in Syracuse, N.Y., said that while the specialized center has not seen an increase in patients, it has noticed a big difference among the patients it has treated since coronavirus quarantines were lifted.

“The patients coming in with heartburn symptoms were now extremely anxious and depressed,” he said. “Something else had changed.”

Companies that make over-the-counter medications are trying to meet demand.

“We are aware that there may be pockets of supply constraints,” a spokeswoman for GlaxoSmithKline, which manufactures Tums, said in an email.

For some antacids, though, the spike in demand can be tied to various preliminary studies that suggest famotidine, the key ingredient in Pepcid, may reduce coronavirus symptoms.

In the spring, some patients with Covid-19 at Northwell Health in the New York City area began receiving famotidine intravenously as part of a clinical trial, following reports of its use in China. The trial was paused in May as patient volume fell, and no conclusions were made. An observational study released in this fall by Hartford Hospital in Connecticut indicated that it too saw positive results among coronavirus patients who were given famotidine.

Of the approximately 900 Hartford Hospital patients treated for coronavirus in the spring, 83 were given famotidine at some time during their hospitalization. Those who received famotidine had lower in-hospital mortality rates and were less likely to need help breathing from a ventilator, the hospital said in its research report.

Still, the medical community is cautious about the early results. In late June, the Infectious Diseases Society of America recommended against the use of famotidine unless in the context of a clinical trial because of insufficient data.

Even before the preliminary research reports were released, demand for famotidine and Pepcid had risen sharply after the Food and Drug Administration in April asked companies to stop selling all forms of the heartburn drug Zantac, and recommended that consumers who took the over-the-counter version, known as ranitidine, stop doing so. Low levels of a cancer-causing chemical had been detected in samples of the drug.

As consumers and physicians shifted from Zantac to generic famotidine and Pepcid, drug makers struggled to keep up. Some manufacturers have reported shortages of the drug to the F.D.A. this year.

Johnson & Johnson, which manufactures Pepcid, did not respond to a request for comment. In July, executives at the company said that over-the-counter medicine sales grew 30 percent in the United States in the second quarter on strong demand for adult Tylenol, Pepcid and other products.

For those who have been on Pepcid or generic versions of famotidine, the past few months have been a struggle.

“I got one bottle in February but have not received any since then,” said Mackenzie Doyle, a 21-year-old student at the University of Nebraska at Lincoln, who takes prescription-strength Pepcid to treat her immune disorder. Finding over-the-counter Pepcid was also difficult this spring, she said. When she visited her parents in Alabama over spring break, Pepcid was sold out in the four stores they visited.

“When the first round of panic buying happened, it was impossible to find Pepcid,” said Ms. Doyle, who eventually found some generic famotidine at Walgreens and takes double the dosage to get her prescription-level strength.

Ms. Doyle admits she has mixed feelings about the preliminary studies around famotidine and coronavirus. While she supports the research, she wonders if the names of the medications being used could have been withheld until more was known.

And then there are the just-in-case hoarders.

“Those make me a little angry,” Ms. Doyle said. “There are so many people who have my immune disorder and who have it worse than I do and need that medication to stay alive. To have people buying it and storing it in their bathroom cabinet and never opening the bottle, that stresses me out.”